The Warren Municipal Federal Credit Union was chartered in 1952, thanks to the efforts of one man, Gerald Neil.  He believed the common bond between employees and city officials of the City of Warren would be a firm foundation to establish our credit union.  So out of his desk drawer in the DPW garage the first City of Warren credit union began, and has grown to what it is today 50 years later a thriving 11 million dollar credit union. 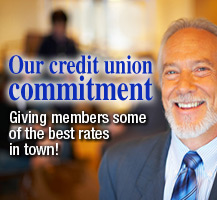